26
Chinchillas need their own sleeping house where they can retreat to. In addition to a place to sleep, a house also provides an extra sense of security for the Chinchilla. We understand this need! Therefore you are for houses and night...
Read more
1 - 24 From 26
| Products

The Aluminum Chinchilla House is a 100% rodent resistant house specially made for Chinchillas. The house can be put down as well as simply hung in the residence. The house is open on the sides and has an open round entrance/exit at the front. Thanks to th

Hugro Bounty Paradise
Not yet rated

The Bounty Paradise is a very robust hollowed-out tree trunk that is perfect for real rodents, such as Chinchillas and Degus. The animals can hide in the house, sit on top of it and chew on it if they feel like it. The dense shape gives the animals a safe 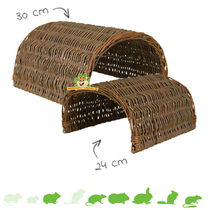 The Trixie Braided Willow Bridge is a very fun and versatile bridge for small and large rodents and rabbits. The willow bridge can be used as a bridge but can also be ideal as a sleeping or shelter. The bridge is a nice extension for the stay or the run!

The Trixie Corner House Jesper is a corner house that can be placed easily and very efficiently in a corner. The house is made of untreated natural wood and has an open bottom. The house has a flat roof so that rodents can use it as a berth.

The Elmato Corner House Malaga is a large corner house for larger rodents. Dwarf rabbits and guinea pigs will really enjoy this robust house. The Elmato Malaga house is made of untreated natural wood and has an open bottom. The roof is p ...

The Thordis house from Trixie is a nice sleeping house that can be placed very practically in a corner. The flat roof of the Thordis provides extra space in the accommodation and can be used as a plateau. The Thordis house has an open bottom and ...

Trixie Cottage Gunnar
Not yet rated

The Gunnar is a special house! The internal compartment allows the placement of cooling packs in the summer and the insulation with hay in the winter (not included). The flat roof provides extra seating space and can be opened to take a look inside.

Beautiful spacious Wooden Cabin for rodents. This spacious log cabin is an ideal sleeping house for your rodent. The log cabin has a wide entrance and a round window at the front, the flat roof also offers extra space to sit or lie down. You can really go in all directions with this fun Hazelnut Bridge! The bridge can be bent easily, so it can be used as:

You can really go in all directions with this fun Hazelnut Bridge! The bridge can be bent easily, so it can be used as:

With this beautiful hazelnut bridge you can really go in all directions! The bridge can be easily bent so that it can be used as:

You can really go in all directions with this fun Hazelnut Bridge! This flexible bridge is the longest in the series. With no less than 72 cm, a lot of fun can be done with this. The bridge can be bent easily, so it can be used as:

For the real sloths there is the Trixie Huis Tilde! Comfortable, spacious with roof terrace ... what more could you want? The house is made of untreated natural wood with an open bottom, a door and window to look out. However, on the roof there is a real

The Natural Living House Ineke is a nice house for medium-sized rodents. The house is made of natural untreated wood. Thanks to the flat roof, your rodent has an extra place to climb. The house also has a convenient driveway and ...

A wonderful rodent home for the larger rodents and rabbits. The house has a square shape and is made of untreated natural wood. The house has a flat roof, so it can also be used as a plateau. The stairs are attached to the ...

The Stally House is a nice spacious house for Rats, Guinea Pigs, Chinchillas and Degus. The house is made of untreated bare wood and has a rural design. The entrance of 12 cm is relatively large and spacious enough to walk through comfortably. The house a 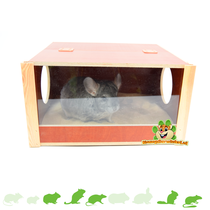 The Bathhouse is ideal for Chinchillas. These animals should take regular dust baths to keep the coat in good condition. It is fine if the sand remains a little on board. A special sand bath house that can be opened from the top and is fitted with plexigl With a willow bridge you can really go anywhere! The bridge is easy to bend, so it can be used as:

This willow bridge is immediately noticeable, he has lost his brown bark jacket. These willow branches have been stripped of the bark. This natural Bridge is made from natural, untreated willow wood.

Very nice and solid block house! The Wooden House is made of high-quality spruce wood and is beautifully finished without staples or nails. With berth on the roof.

Spacious house for guinea pigs and rabbits. The house offers optimal shelter and thanks to the flat roof, the animals also have a raised berth where they can lie comfortably.

Wooden House with Birch Roof 40 cm
Not yet rated

Het Houten Huis is a very spacious house made of untreated natural wood. The roof is made of birch wood. The house has two entrances and a flat roof where the animals can also sit.

Beautiful spacious Wooden Log Cabin for the larger rodents. This spacious log cabin is an ideal sleeping house for your rodent. The log cabin has a wide entrance and a round window at the front, in addition, the flat roof offers extra space to sit or rela

Order chinchilla houses easily and quickly at DRD Rodent Shop ® The Chinchilla Webshop for your Chinchilla!

Chinchillas sleep during the day. It is therefore important that they have their own sleeping place. Because Chinchillas are group animals and like to sleep together, it is useful that the house is large enough for the group or at least for two chinchillas. In addition, the animals need a house to retreat to. In addition to a place to sleep, a house also provides an extra sense of security for the Chinchilla. We understand this need! That is why you have a wide choice of many suitable houses for chinchillas!

Although chinchillas don't sleep in a burrow in the wild, they like to hide in rock crevices and like to be sheltered. Once chinchillas get their own home, they will happily sleep in it. It also shields the animals from any tumult from outside. The animals sleep during the day, which gives them extra rest in a sleeping house.

The size of the house depends on the group size and the personal preferences of the animals. Do they like to sleep together? Then a larger house is recommended, so that the animals can sleep comfortably together. If some group members find it more pleasant to be alone, a small house that only fits one individual is also possible. With the latter option, it is better to have several small houses so that the animals do not argue about it. In each group there should be at least one larger house that they can move into together.

Most houses are made of wood and some of metal such as aluminum. If your chinchillas are real rodents, an aluminum house has the longest life expectancy. A house made of wood can be quickly damaged.

Pay attention! Many houses are held together by nails, staples and/or glue. If your animals start gnawing at their sleeping house, it is advisable to remove it so that they do not get hurt.

How can you prevent gnawing on a house?