The Ferplast Drinky drinking bottle 300 ml L182 stands for convenience and pleasant drinking for the rodents! It has a professional stainless steel valve, which guarantees an excellent seal. Equipped with special holder to attach to the bars. 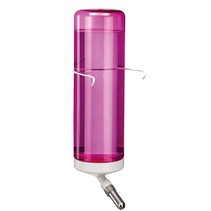