A colored drinking bottle Classic 75 ml. Made from recyclable material. Transparent, so you can see if there is still enough water in it. With a stainless steel spout, equipped with double ball technology, so that the bottle does not leak. Easy to hang with the supplied bendable iron wire. The 75 ml drinking bottles are suitable for the aluminum drinking bottle holder.

Instructions for use Drinking bottle Colortone

Social rodents that live in a group should have several drinking bottles, so that sufficient water is available for all animals. Dominant animals can claim a drinking bottle that prevents other animals from drinking. 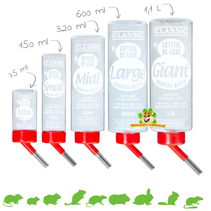 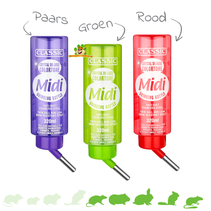 Out of stock
Reviews
No reviews found
Read or write a review
Add your review
© Copyright 2023 DRD Knaagdierwinkel | www.drdknaagdierwinkel.nl